Server farms are everywhere. Well, on every continent and probably in every major city, and even in places where you wouldn’t expect them. Also in remote towns and places where not too many people go without a reason. I heard some of them are inside mountains themselves so that they can sustain even a nuclear blast- now that’s a secure data center.

There are a few aspects that define a perfect server farm (data center) and those are the energy efficiency/heat management, automatisation, capacity and security/safety. If these aspects are taken care of, the data center will be up to date with today’s standards and on route to continue to develop and progress. 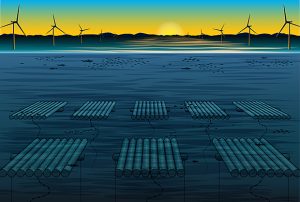 Energy consumption is one of the main factors that indicate how profitable a data center can be. Therefore, it is one of the main aspects and focuses of engineers. Nowadays, all major companies such as Google, Facebook, Microsoft, and Amazon are switching to 100% renewable sources of energy because of the following reasons:

Another important aspect is heat management. The way server farms control air flow is one of the main challenges to engineers. This is done by controlling the air flow from the point it enters the data center to the point where it is cooled or thrown out of the data center.

In the future, robots will do everything instead of humans. Well, today that’s not the case and most companies operate today, not in the future. Automatisation is something everybody is trying to improve so they can have a low maintenance cost. In most data centers all humans are doing is monitor the servers for errors and replace the broken hardware with a new one. Well, in this case for building maintenance- humans are still unbeatable.

The perfect server farm has to have top security and safety installed within. Protection must extend to both hardware (building security) and software (firewall, anti-malware, anti-virus and other security measures).

The truth behind the interwebs security is that it is constantly under attack by hackers all around the globe. They are always awake and ready to take over your system, steal your data or submit your own hardware and use it for their own purposes free of charge. This is what Data Center Security experts are battling most of the time. Sometimes they win and then sometimes they don’t but one thing is certain- this kind of war will not stop anytime soon. It is corporate brains against self-taught persistent brains.

The capacity of the data center is directly connected to how many things the servers in it can store. This means that most data centers are constantly upgrading their hardware so that they can become faster, stronger and better. The most recent mass change that happened in the industry was that most web servers were converted from HDD (hard disk drive) to SSD (solid disc drive). This gave servers the ability to read and write data roughly ten times faster than ever before. SDD’s are the future, no doubt about that.