The future of Virtual Reality (VR) used to be in the hands of Oculus Rift and Samsung Gear VR. However, other manufacturers are jumping into action to produce the best VR experience out there. Even though engineers have a lot of challenges such as motion sickness (which is like seasickness), the VR display resolution is the next step to take action. 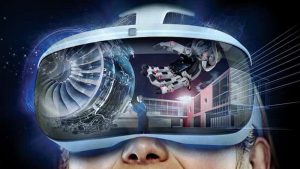 For the best VR experience, a large quantity of computing power is needed. Computer graphics cards capable of VR have a specific message indicated on the box, so you should check that before buying a brand new computer graphics card (which is overpriced at the time of writing because of the cryptocurrency mining-mania that is going on at the moment). On top of that huge cost there is the cost of Oculus Rift (consumer edition or dev edition) which is no small expense.

How Long can it Take?

Time will tell how big the VR will be in a range of 5 to 10 years and how much Mark Zuckerberg thinks it will take for this industry section to take traction and double its size in terms of billions of dollars worth of market size. He was interviewed by Bloomberg and Zuckerberg stated: “VR is a good candidate to be the next major computing platform.” He stated that it might even become the main form of communication technology and the way people hang out in the near future.

In my personal opinion, VR has a few good breakthroughs to go through before reaching a mass adoption level. Clearly, people do want VR and when the time comes, all computers might take shape of goggles and AR or VR will be initiated on demand to represent everything from huge size screens to small laptop screens. It will be a “show all” device to replace all personal computers and make humans smarter. As a high-end device, within a hundred years, all it will take is to put a lens on your eyes and all of the internet will be there along with your inbox and contacts and all the knowledge of the world will be just a blink away. Now that’s the future we want.